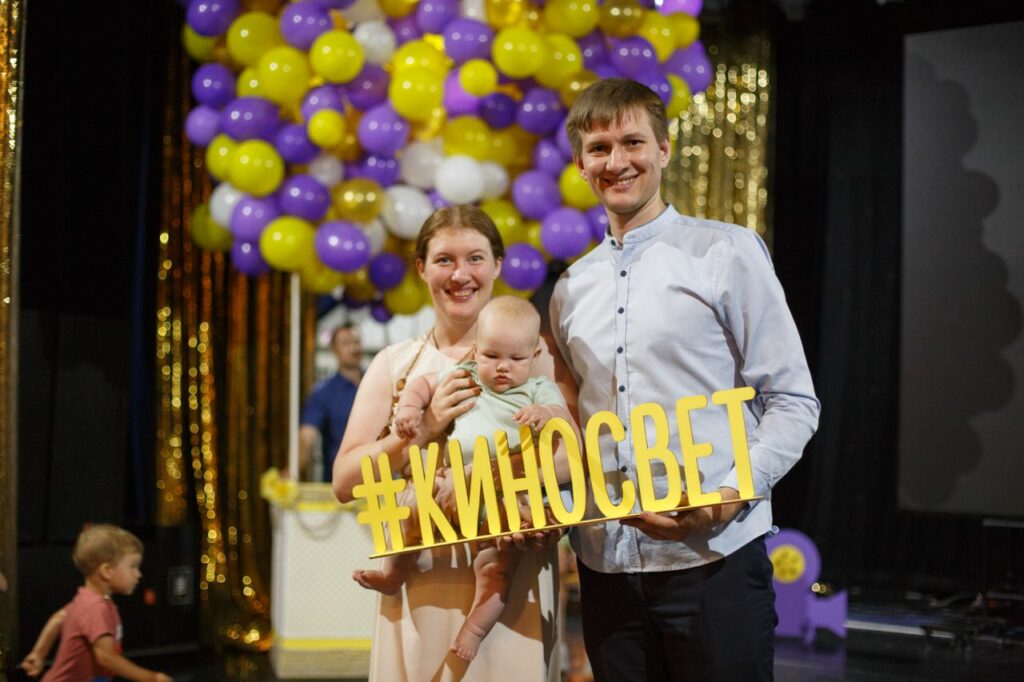 On July 7-12, “Kinolider” Academy of Young Filmmakers and “Family House” – the centre of promotion of family values held the V International Children’s Film and Television Festival “KINOSVET”. The festival presented a new program “Hallowed be Thy Name” to the nominees, and a creative competition program to the participants.

Prizes and diplomas were sent to the festival winners by mail.

Despite the online format, a bright opening ceremony of the festival took place on the stage of the Youth Variety Theater in Minsk. There was a live broadcast for all participants and all who wished to join the event via ZOOM and YouTube platforms.

Invited guests and masters of the festival gave their opening remarks both from the theater stage and via videoconference. Among them: Boyprav Vladimir Andreevich – Deputy Director of the National Center for Contemporary Art of the Ministry of Culture, Republic Belarus, Marina Zamsharifovna Targakova- mentor and ideological mastermind of the festival team, Elena Tsyplakova – stage and film actress, producer, Gennady Akimenko- master of the festival for making documentaries, TV director, Dmitry Mishin – cinematographer in production the main information, entertainment and artistic stage programs.

The team of the Belarusian State Choreographic College and soloist Maria Shashkovskaya, as well as young pop song artists Lukashevich Taisiya and Stepanchikov Pavel creatively performed on the theater stage.

At the end of the Opening ceremony the first screening of the nominee film took place. The broadcast of the opening ceremony was watched by about 600 participants.

Young filmmakers attended the following in-depth workshops: Vladimir and Natalia Morozov taught film directing, Tatyana Miroshnik- screenwriting, Alexander Yermolin – film promotion. Kids were learning cameramanship with Dmitry Mishin and were acting with Alesa Kacher. Master classes were held every morning. In the afternoon there was a panel discussion of films in the nominations “Documentary” with Gennady Akimenko, “Feature Film” with Dina Ibragimova. Films were viewed and discussed in the “KinoProfi” program. In the evenings, KINOSVET arranged screenings of nominated films for the new program “Hallowed be Thy Name”. Every day participants and the audience met honored guests, discussed films, asked questions and got answers from Alexander Khakimov, Marina Targakova, Elena Tsyplakova, Vladimir Petruchik , Natalia Fedchenko, David Shapiro and John Grisser.

The closing ceremony was held on the Variety Theatre stage, with a live broadcast for all participants and the audience through ZOOM platform and YouTube. Masters of the ceremony summed up the festival KINOSVET 2021 results. Organizers announced the festival winners.

The winners in all nominations of the “Kinoleader” and “Kinoprofi” programs were announced. Natalya Morozova, the festival founder, named the winners of  the “Hallowed be Thy Name” program and issued special diplomas for revealing the most kind and important topics.

In total festival organizers presented 30 statuettes, 20 prizes, 5 special festiva; diplomas and a prize from the festival partners called “For the Peace Benefit” award.

Also, 5 personalized invitations to the KINOSVET-2022 festival were awarded to the most active participants in the Telegram chat.

KINOSVET 2021 invited everyone free of charge.

At the moment, all master classes, workshops, opening and closing ceremonies of the festival, nominees films and winners, the authors of which allowed them to be posted on the Internet, are downloaded on the festival YouTube channel, available and free for everyone.